EVERFIT TECHNOLOGY CO., LTD. (EFT) sanitary diaphragm valves were tested at the pharmaceutical companies, and the companies were applying cleaning-in-place (CIP) and sterilization-in-place (SIP) self cleaning and sanitation systems in England, Germany and Japan. They are world leading pharmaceutical companies that utilize high standard processing equipment, which does not allow any defeat operations. It was a cooperation between EFT and one of the largest government organizations named Industrial Technology Research Institute. The objective was to develop the most suitable diaphragm material to achieve the process equipment requests from biopharmaceutical companies, which is exceedingly clean. As a result, when pharmaceutical companies realized that they can buy medicine processing equipment from EFT and get equivalent quality of products and services just like other well-known suppliers, EFT's business started to boom.

When you purchase processing equipment for your pharmaceutical production line, look no further than EFT. For an actuator diaphragm valve, the teflon is imported from Japan, and other important components are mostly imported from Germany and France. For example, the spring is an important component for actuator diaphragm valve, to assure their high tensile strength, they are imported with a report, which says it can undertake the usage of more than 2,000,000 times.

EFT was invited to a yogurt company to visit their processing line due to their processing difficulties. The imperfect design of their diaphragm valve had ruined the production and they needed someone to find out what went wrong. Because the yogurt product line was using SIP system, when temperature went up, the rubber melted onto the screw and ripped the rubber. To solve the problem, EFT re-designed the valve by using a diaphragm to attach a screw - the diaphragm that was designed specifically for high temperature processing machines. 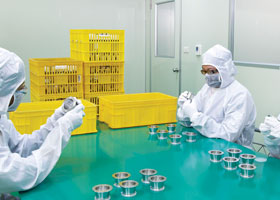 Cleanroom (class 10,000) For High Standard Diaphragm Valve: For semi-conductor, pharmaceutical, bio-technology and food processing industries, stainless steel diaphragm valves are required to be purified and particle-free. Therefore, EFT has set up a cleanroom that is equivalent to ISO standard. In the cleanroom, diaphragm valve components will be cleaned; the assembling and packaging processes will be done in the room before leaving the room.

Next: Vacuum component and fitting supply

Clamp Style Fittings are most popular for easy assembly...

EFT hybrid adaptors provide a transition from one method...

EFT has developed a line of valve bodies that help...

Ideal for uninterrupted production in a broad range...

Ideal for uninterrupted production in a broad range...

EFT is a pneumatic seat valve with sanitary and flexible...

The sample cock valve has a fixed handle and is manually...

Clamp Style Fittings are most popular for easy assembly...

ASME BPE Fittings serves the needs of those involved...

Looking for more information? You can fill out the Inquiry Form to tell us your needs or questions, we will respond soon!